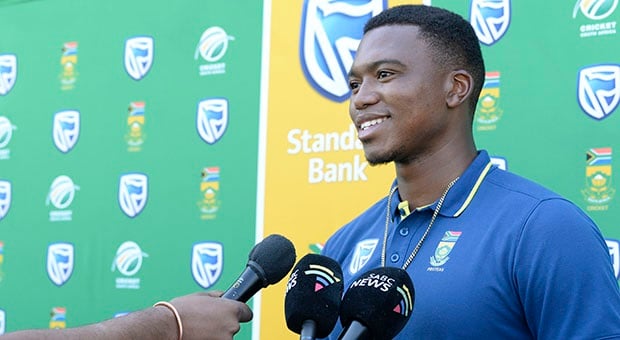 London - South Africa pace bowler Lungi Ngidi will be sidelined for up to 10 days after suffering a hamstring strain in Sunday's Cricket World Cup defeat against Bangladesh, but Hashim Amla is expected to face India on Wednesday.

Ngidi limped off the Oval pitch after bowling just four overs in Bangladesh's innings and Proteas team doctor Mohammed Moosajee revealed he won't be back for seven to 10 days.

That rules him out of the must-win clash with India in Southampton.

"Ngidi sustained sharp discomfort in his left hamstring. We decided he had a hamstring strain. He will be out for week to 10 days," Moosajee told reporters.

"He will have a scan tomorrow (Monday). We hope he can be ready for the West Indies match."

The Proteas are due to play the West Indies on Monday, June 10, also in Southampton, some eight days from now.

There was better news on star batsman Amla, who missed the 21-run defeat against Bangladesh after being hit on the helmet by England's Jofra Archer in Thursday's loss to the hosts.

Amla returned to bat against England after initially retiring hurt with concussion-like symptoms.

He was ruled out of the Bangladesh game as a precaution after waking up feeling unwell, but should recover in time to play against India.

"The concussion assessments were done on Thursday and initially the results were inconclusive. Then the next test showed he could bat," Moosajee said.

"Subsequent to the match, the next day he felt some symptoms, so as a precaution we decided to rest him for this game.

"The plan is to have him ready for the game against India in Southampton."