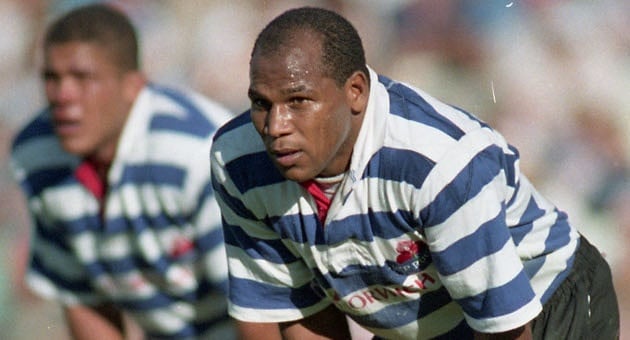 Cape Town - The Western Province Rugby Union has paid tribute to former Springbok Chester Williams who passed away on Friday at the age of 49 after suffering a heart attack.

The mercurial wing earned 63 caps for Western Province between 1991 and 1998, putting in countless memorable performances in the blue and white hooped number 11 jersey.

Williams made his Springbok debut against Argentina in 1993 and played 27 Tests for South Africa until his last Test, against Wales in 2000, scoring 14 Test tries in the process. In total, he played 47 matches in the green and gold and scored 27 tries.

In 1995, he was a member of the initial Springbok squad for the Rugby World Cup, but had to withdraw due to injury shortly before the tournament started. He was later recalled and scored four tries in the quarter-final against Samoa.

Williams was named the SA Rugby Player of the Year in 1994. Apart from lifting the Webb Ellis Cup in 1995, Williams was also a member of the Springbok squad that won the Rugby Championship (then Tri-Nations) in 1998, and he won the Currie Cup with the Golden Lions in 1999.

Following his playing career, Williams turned to coaching and was involved in Western Province Rugby structures, serving as Head Coach of UWC at the time of his passing and working with the Western Province U21 side just this week.

WPRFU President Zelt Marais said that Williams' passing is a sad moment for anyone who witnessed his contributions to rugby both on and off the field.

"Chester Williams was an icon of our sport who gave selflessly of himself and will be remembered as one of the greats of the game. "Our thoughts are with his family in this difficult time," he said.

Marais added that the WPRFU and its affiliated clubs will pay tribute to Williams' memory this weekend.

"It is fitting that all club games this weekend will observe a minute's silence, which will give us all an opportunity to reflect on the immense contribution that Chester has made," he said.