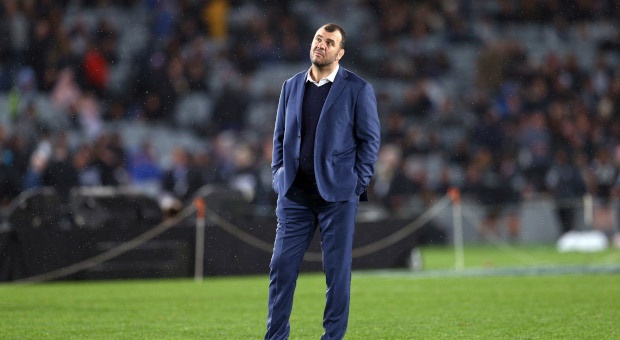 Parramatta - A largely second-string Australia scored the win they wanted on Saturday to ensure their Rugby World Cup campaign begins on a high, but the 34-15 beating of Samoa was less than convincing.

The Wallabies, runners-up at the last World Cup, went into the clash in Sydney with a makeshift team led by David Pocock in his first Test in almost a year and proved a class above the Pacific islanders in the opening half.

Tries from Adam Coleman, Marika Koroibete, Adam Ashley-Cooper and Lukhan Salakaia-Loto sent them into the break with a solid 22-3 lead, but defensive lapses cost them in the second stanza.

The hard-running Samoans hauled themselves to within seven points before tries from Dane Haylett-Petty and Matt Toomua put the game beyond reach.

"It was a tough one, we took some really big hits, but it was also really enjoyable," said Pocock, who was sidelined virtually all season with a nagging calf injury and only played 58 minutes on Saturday.

"We have plenty to work on... it was stop-start at times. They put us under pressure.

"(But) I think we showed some good stuff tonight."

Australia coach Michael Cheika opted to keep many of his big guns - including Michael Hooper, Kurtley Beale, Samu Kerevi and Rory Arnold - on the sidelines, not wanting to risk last-minute injuries.

That opened the door for players such as Bernard Foley, Jack Dempsey and Will Genia to press their case to be in the World Cup starting XV, but none stood out.

Ranked 16, Samoa only just scraped into the World Cup after a poor qualifying campaign but came into the game on the back of wins over Tonga and a New Zealand Heartland XV.

They stunned the Wallabies in Sydney eight years ago, winning 32-23, but a repeat looked unlikely.

Australia took the lead after seven minutes, capitalising on an overthrow from a Samoan lineout with Coleman crashing over in the corner.

Dangerman Koroibete added a second, weaving past three players on his way to the try line as the Wallabies exposed gaping holes in the Samoan defence.

The home team dominated possession and veteran utility Ashley-Cooper picked up a Toomua grubber kick to bag his 38th try, inching ahead of Israel Folau into third on the all-time Australia list behind David Campese and Chris Latham.

Salakaia-Loto added another but the Samoans bravely fought back as Australia went to sleep.

Dwayne Polataivao, on for scrum-half Scott Malolua who was stretchered off, apparently with a shoulder injury, bagged their first try of the night on 52 minutes and grabbed a second soon after Australia restored order.

"In the first half we gave away four tries by making mistakes and Australia, being a quality side, capitalised on it," said veteran Samoan scrum-half Tusi Pisi.

"We have to get better, there are no more excuses, we just have to make it happen. We've got to go to Japan believing we can win."

The victory means two-time World Cup champions Australia head to Japan with a 3-2 record this year, which has included wins over New Zealand, Argentina and Samoa, but also losses to the All Blacks and South Africa.

They open their tournament against Fiji, while the Samoans face Russia.