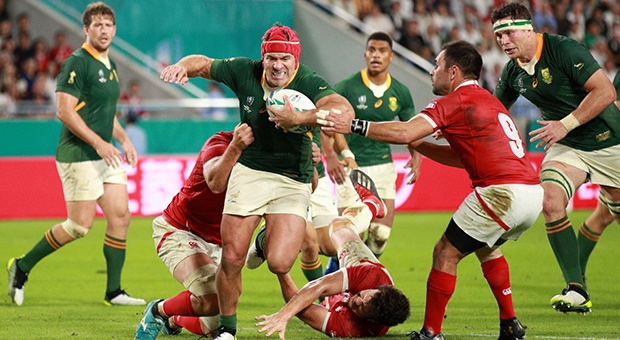 Cape Town - The Springboks booked their spot in the quarter-finals of the 2019 Rugby World Cup in Japan with a comprehensive 66-7 thrashing of 14-man Canada in Kobe on Tuesday.

Despite currently topping Pool B having completed their four matches, in all likelihood the Springboks will slip to second once the defending champion All Blacks have played - and beaten - Italy on Saturday.

Below, seven stats and facts from the Springboks' latest victory in Japan:

South Africa’s 59-point win was their fourth biggest ever at the Rugby World Cup while their points tally of 66 was their third highest in a game at the tournament and highest since scoring 87 against Namibia in 2011.

Cobus Reinach scored the earliest hat-trick ever in a Rugby World Cup match, crossing for his third try in the 21st minute, beating the previous record held by Australia’s Chris Latham who crossed for a third try in the 25th minute against Namibia in 2003.

Cobus Reinach rounded off his hat-trick 10 minutes and 25 seconds after scoring his first try of the match, only Australia’s Adam Ashley-Cooper has taken less time between the first and third tries of a hat-trick at the Rugby World Cup (9m 16s v USA in 2011).

Canada’s Josh Larsen was sent off against South Africa, it was Canada’s fourth red card in Rugby World Cup history, more than any other side.

South Africa have won 47/47 lineouts so far at the 2019 Rugby World Cup, including 8/8 against Canada, the only side yet to misplace a lineout throw at this edition of the tournament.

South Africa’s Schalk Brits crossed for a try against Canada aged 38 years and 145 days, he’s the second oldest player to score a try at the Rugby World Cup after Diego Ormaechea (40y 13d); Brits had already become the second oldest try scorer 10 days ago when he crossed against Namibia.