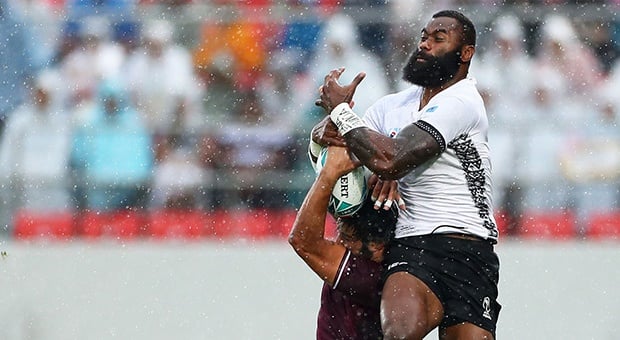 As it happened | Georgia v Fiji

Coach John McKee had demanded a response from his players after they suffered a humiliating upset at the hands of Uruguay and the win puts Fiji in a strong position to secure third place in Pool D to win automatic qualification for the next World Cup.

The game kicked off in torrential rain at the Hanazono Stadium and the opening exchanges were attritional, dominated by the set-piece and high kicks.

The skies cleared but the slippery ball kept the handling errors high until Georgia produced a stunning move from their own line on the stroke of half-an-hour, falling just short of a try but coming away with three points.

In a tournament where the refereeing of high tackles has been a major talking point, Josua Tuisova could well have seen a card for a glancing blow but Kiwi referee Paul Williams decided it was a penalty only.

The teams went into the break with Fiji 7-3 up after a half that was one for the purists in difficult conditions to play rugby.

But as the rain eased, Fiji brought the crowd to life five minutes into the second half with a flowing try down the left from an outrageous offload, finished off by Frank Lomani.

However, Georgia refused to lie down, brilliantly winning the ball from their own kick-off and overpowering the Fijian defence for veteran flanker Mamuka Gorgodze to score his 27th international try.

But Fiji secured a potentially vital bonus point when Radradra cantered in from just inside the Georgian half, beating the covering tackle with a glorious step off his left foot.

Flanker Semi Kunatani put the result beyond doubt with just over 10 minutes to go, bundling over from short range for Fiji's fifth try, converted from wide out by flyhalf Ben Volavola.

By now, the Flying Fijians were living up to their nickname and they produced a breathtaking try from the next kick-off, the ball passing through several hands over the length of the field for Api Ratuniyarawa to score.

And Radradra put the icing on the cake, sprinting down the left wing to dot down for a double.

Fiji next play Wales on Wednesday, October 9 (11:45 SA time) and will be ruing their loss to Uruguay, as they could have been in a position to secure a shock quarter-final place.

Meanwhile Georgia's final Pool D game will be against the Wallabies on Friday, October 11 (12:15 SA time).