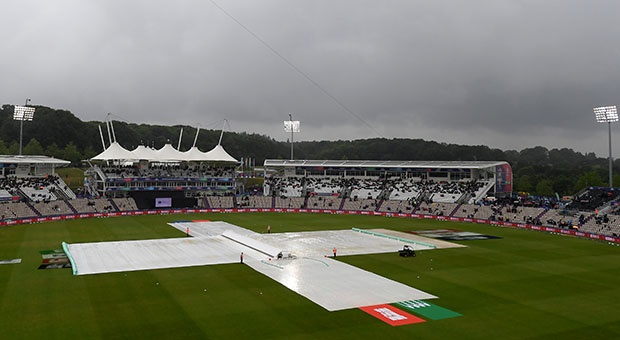 The rain falls at the Rose Bowl in Southampton (Getty).

Southampton - As the rain fell on the Rose Bowl in Southampton on Monday, the inevitability of a failed South African World Cup campaign grew stronger.

If this match ends if a 'no result', which now looks the most likely outcome, South Africa will be winless from their four tournament outings so far and facing a near-impossible task to the semi-finals.

It will leave the Proteas with a solitary log point in what is comfortably their worst performance at a World Cup to date.

Having lost the toss and being asked to bat, South Africa were reduced to 29/2 after 7.3 overs before the drizzle forced the players off the field.

Were it not for their desperate log position, the rain would have been seen as a blessing for the Proteas.

Sport24 spoke to some of the South African fans who had come out to support the Proteas on Monday, and their assessment of things echoed the frustration that has been heard from back home.

Graeme Dyall, who was watching the Proteas play for the first time ever, was draped in a South African flag with beer in hand.

"It's not what we need, but at least we might get some points out of it," he said.

Johnny Munien has travelled all the way from Durban to follow the Proteas' World Cup charge, and he did not hold back.

"We are die-hard South African supporters and this has been disappointing. We hoped that today would turn it around for us, but we don't have control of the weather," he said.

"What is more disappointing is when you come into a World Cup with injured players, knowing that they are injured. That is totally unfair to the guys who have played and been left at home who are not injured."

Matthew Norman, meanwhile, is giving the Proteas no hope of making the play-offs.

"I think this is probably the worst team that South Africa have ever had at a World Cup, so I don't see any chance."

"I'm pretty disappointed, but there is not much you can do," he said.

"I can't see them saving this ... not with the way they have played so far."

Aldo du Plessis, from Cape Town, also pointed to the fact that South Africa would at least have a point on the board should there not be a result.

"It's a disaster, like every other World Cup I suppose," he said.

Sport24 will keep you updated with any further developments from the Rose Bowl.