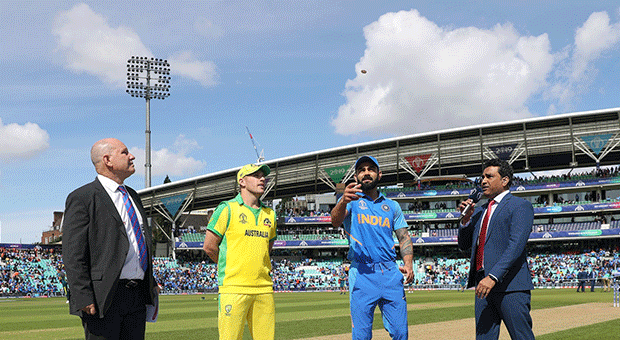 Is toss weighing too heavy on CWC semi-finalists?

Manchester - Cricket's World Cup semi-finals might be loaded with star power, but the battle for places in the final could turn on a crucial toss of a coin before the action has even started.

There were just a handful of successful run chases in the World Cup group stage, a trend that suggested winning the toss and batting first will be potentially decisive in the semi-finals.

India and New Zealand will put that theory to the test when they meet in the first semi-final at Old Trafford on Tuesday, followed by hosts England facing holders Australia in Birmingham on Thursday.

All eyes will be on the coin flip after a group stage notable for teams failing to successfully chase targets in excess of 260 on all but two occasions.

Former Pakistan star Imran's suggestion, which appeared on Twitter on the morning of his country's defeat, is more relevant now with teams finding it increasingly difficult to chase tall scores at the business end.

India skipper Virat Kohli, whose team chased down 265 in their last group game against Sri Lanka at Headingley on Saturday, said handling pressure is key to batting second.

"It comes back to the same point - handling pressure. You make two bad decisions when you are chasing and the game goes too far away from you to pull it back," Kohli told reporters on Monday.

"I assume that's going to be the case. Having been in so many chases, I understand that the pressure can be very high if you don't go with the pace of the game.

"We are not worried about the toss. It's an uncontrollable. You have to be prepared both ways."

Only once was a score of 300-plus successfully chased down in the group stage, with Bangladesh surpassing West Indies' 321-8 at Taunton on June 17.

Four teams, including New Zealand, have won toss at Old Trafford and gone on to win the game, but Kiwi coach Gary Stead does not read too much into the stats.

"I think again that's part of being at the World Cup and being a high-scoring ground, runs on the board can count for that as well," said Stead.

"We were in a cliff-hanger here ourselves (against the West Indies, who lost by five runs) and that could have gone either way. It doesn't concern me, I think it's a good cricket surface out there."

Eoin Morgan's England, with their powerful batting line-up, have scored over 300 in six of their nine outings - five of which have come batting first.

The hosts' last outing at Edgbaston, where they play Australia on Thursday, remained a batting paradise against India, with Jonny Bairstow hitting a match-winning 111.

Australia skipper Aaron Finch had spoken about reining in opposition batsmen after they nearly chased down 326 against South Africa in their last group game only to lose by 10 runs.

England had lost to Australia at Lord's in the group stage after failing to chase down the holders' total of 285-7.

But coach Trevor Bayliss is confident the hosts will not be afraid to chase a total in Birmingham.

"Over the past four years we have won 14 of the last 17 times we have batted second," he told the BBC.

"So batting second doesn't scare our guys and the wickets are a little better now than they were earlier in the tournament. We are full of confidence and happy to be in the semi-finals."