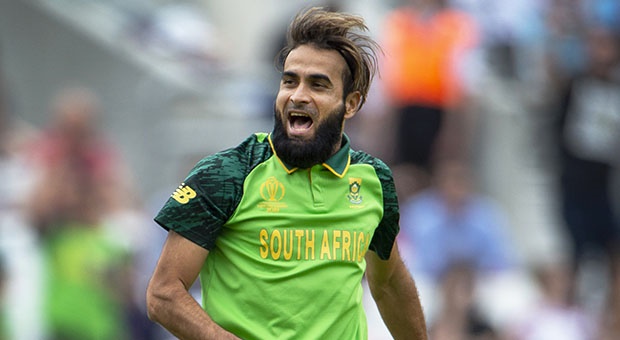 Manchester - Proteas skipper Faf du Plessis has backed 40-year-old Imran Tahir to keep performing for the national side through to the end of next year's T20 World Cup in Australia.

Tahir played his final ODI for South Africa at Old Trafford in Manchester on Sunday as the Proteas ended their 2019 Cricket World Cup campaign with a 10-run win over Australia.

In the build-up to that match, Tahir had spoken about how difficult it was to say goodbye to ODI cricket, but he re-emphasised his desire to keep playing T20 cricket and committed fully to this year's Mzansi Super League (MSL) in an effort to show that he is still the country's best option in the format.

Next year's T20 World Cup gets underway in October and Tahir will be 41 by then, but Du Plessis has backed one of his biggest assets in white ball cricket to keep going.

"I'll make sure that I keep pushing him to be hungry to play for us in the T20 World Cup," Du Plessis said.

"He will be a big player.

"Over the next while I think he will be released a little bit from international commitments so we can make sure we can get him back in a year's time for that T20 World Cup."

Du Plessis was also full of praise for Tahir's contribution to South African cricket both on and off the field.

"I have played a long time with Immy and I played with him in the IPL as well," said the skipper.

"He's just got an incredible amount of passion and love for the game of cricket and he really commits to whichever team he plays for because he's such a big-hearted player.

"He is South Africa's best-ever celebrator and I hope that people will remember that because that inspires kids.

"He's been a fantastic cricketer but in terms of what he brings to our team, has been really special because he is a really caring person."

Tahir will not be playing any domestic cricket other than the MSL for the coming season.